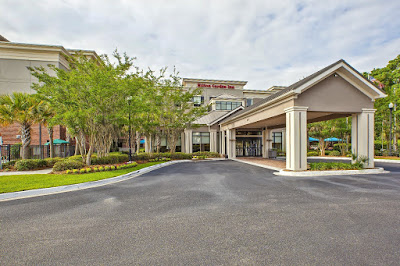 Fightertown, here we come! The nation’s 4th-largest hotel owner-operator acquires the Hilton Garden Inn Beaufort in the heart of the South Carolina coast.
The latest member of the squadron! MCR — the country’s 4th-largest hotel owner-operator — has acquired the 115-room Hilton Garden Inn Beaufort in South Carolina’s beautiful Lowcountry region.
The hotel is just a 40-minute drive to Hilton Head Island and less than an hour from the Spanish moss splendour of Savannah, Georgia. But the real action is minutes away at the U.S. Marine Corps Air Station, one of the only places in the world where pilots train to operate F-35B Lightning II jets, which can reach speeds of Mach 1.6 (that’s about 1,200 miles per hour in civilian language). Grab your aviators and practice your call signs because Tom Cruise has nothing on the daring flyers of Fightertown East.
On neighbouring Parris Island, you’ll find the Marine Corps Recruit Depot, the primary training centre for generations of Marines since 1915. The base welcomes more than 17,000 recruits annually. In town to celebrate a new graduate? Bunk at the Hilton Garden Inn Beaufort and say “Semper Fi” with a hand-crafted cocktail at the fully stocked bar.
The Hilton Garden Inn Beaufort welcomes military and civilians alike — as long as they can drop and give us 50 at our 24-hour fitness centre. (Kidding! At ease, at ease.) Take leave in the sun-soaked pool and lounge around in the outdoor areas. Pile your plate with grub at the on-site Garden Grille, serving cooked-to-order hot breakfasts every morning and, at night, pasta, steak, ribs and other hearty fare. Prefer to dine in? Order room service or prep a meal in the comfort of your guestroom (all are equipped with a mini-fridge, microwave and coffee maker). 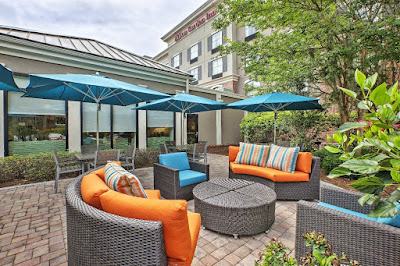 Still, more R&R awaits a quick walk from the hotel in Beaufort’s historic district. Founded in 1711, the city boasts majestic live oaks and stunning old homes that go back centuries. (Beaufort is routinely named one of the most picturesque and charming areas in the South!) Those looking for maritime pursuits will want to book in time for the city’s 65th annual Beaufort Water Festival, planned for July 16–25. Expect raft races, fishing tournaments, sailing regattas and shrimp — lots and lots of delicious shrimp served with corn, sausage and potatoes in a traditional dish known as Beaufort Stew.
The Hilton Garden Inn Beaufort is located at 1500 Queen Street and features: 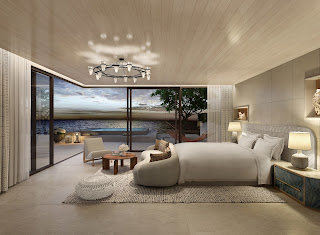